The IECS Conference is Coming up! Click Here to Learn More & Register Today

Did You Know? Drowning in permit applications? Partner with GeoSolv to avoid the need for foundation permits!

Slope Stability Systems are Essential Tools for the Stabilization of Unstable Soils. They Protect Vulnerable Structures as well as the Surrounding Environment from Major Geotechnical Hazards

Creating slope stability is vital in avoiding future geotechnical catastrophes or repairing existing failed or failing slopes. Slope instability can cause major damage to nearby structures, and can negatively affect the surrounding natural environment. By completely stabilizing surrounding slopes, future expenditures on structural or ecological failures and repairs can be avoided, saving both time and money.

What is Slope Stabilization?

Slope stability can be defined as the possibility of soil-covered slopes to either withstand or not withstand soil movement. The balance of the slopes’ shear stress and shear strength determines the slopes’ overall stability. On soil slopes, soil is continuously acted on by gravity. If the shear strength in the soil or at a plane in the profile is overcome by the driving force (weight), failure can occur, resulting in slope instability. Slope position, angle, water saturation and surrounding climate, as well as soil type, are all contributing factors to the potential movement of soil and the creation of slope instability. Slope stabilization is the process of resisting driving forces to provide an improved factor of safety against slope failure. Slope stabilization is achieved through mechanical, structural, or geotechnical methods.

How is Slope Stability Achieved for New Slope Construction?

New slope construction provides the design team with the advantage of conducting detailed engineering of the proposed slope and the availability of multiple approaches, depending on the specifics of the planned slope.  Many factors are involved in the design of new slopes/embankments.  They include height of slope, slope inclination, right of way or available land, materials used in construction, existing and future groundwater and surface water conditions, and existing subsurface soils.

Slope stability for new slopes is achieved through various methods, depending on the nature of the grade separation, embankment dimensions and shape, as well as other factors.  Typical methods for building new slopes from steep-sloped to vertical faces include Mechanically Stabilized Earth (MSE) walls (block or panel facing), Reinforced Soil Slopes (RSS) with wire mesh-faced systems (using rock or soil), and often include a geogrid or steel-strip tieback system.  Other approaches for near-vertical walls or step-back systems include cast-in-place retaining structures, gabion baskets, and stacked natural or cultured stone/block systems.

If the proposed new slope is a cut-slope and there is not enough accessible land for a slope that is stable naturally (i.e. 2H:1V to 3H:1V), the Geopier SRT system can be applied to steepen the cut slope to as much as 1H:1V very cost effectively. This can provide more useable land above or below the slope and allow the slope to fit within Right of Way (ROW) constraints.

What if the New Slope has Poor Subsoils?

While there is often good control over the materials and methods used to construct a new slope, the existing subsoils may be a problem that could create instability.  If these pre-existing soils exhibit low shear strength and/or high compressibility, this could create slope stability issues for the newly constructed slope regardless of the care taken during slope construction. Methods to improve slope or embankment subsoils include Ground Improvement and Rigid Inclusion approaches.   The Geopier Ground Improvement Methods have been very successful in stabilizing subsoils for new slopes, embankments or retaining walls.

How is Slope Stability Achieved for Existing Failed or Failing Slopes?

When an existing slope is unstable according to slope stability calculations or is in a failed or failing state, there are various methods to remedy the situation. One of the most common historical methods of repairing failed slopes is to excavate out the offending soils, and to bench and rebuild the slope with geogrid or geofabrics with or without a facing system.  This often allows the reinstatement of the slope to original dimensions in a stable state or it can even be rebuilt steeper to accommodate changing requirements above or below the failing slope.  While this method can be effective, it is often costly and requires a great deal of space and access.

Other methods for stabilizing existing slopes include soil nailing, which can be accomplished through many methods, including helical soil nails, grouted soil nails (micropiles), driven soil nails, or launched soil nails.  Soil nailing is often done mainly perpendicular or near-perpendicular to the slope requiring reinforcement and the nails are driven through the active zone of the slope past the slip plane.
Hard facing (prefabricated or cast-in-place such as shotcrete) is attached or affixed to the soil nails, which are often on a tight spacing.

An excellent way to reinforce failing slopes is the Geopier SRT System, which is a vertical plate pile system that is different from a soil nail in the approach taken to repair slope stability issues.

Sign up today for your complimentary Educational Session, or call us anytime at (905) 266-2599. You can also email us at solutions@geosolv.ca with any questions you may have. We look forward to hearing from you! 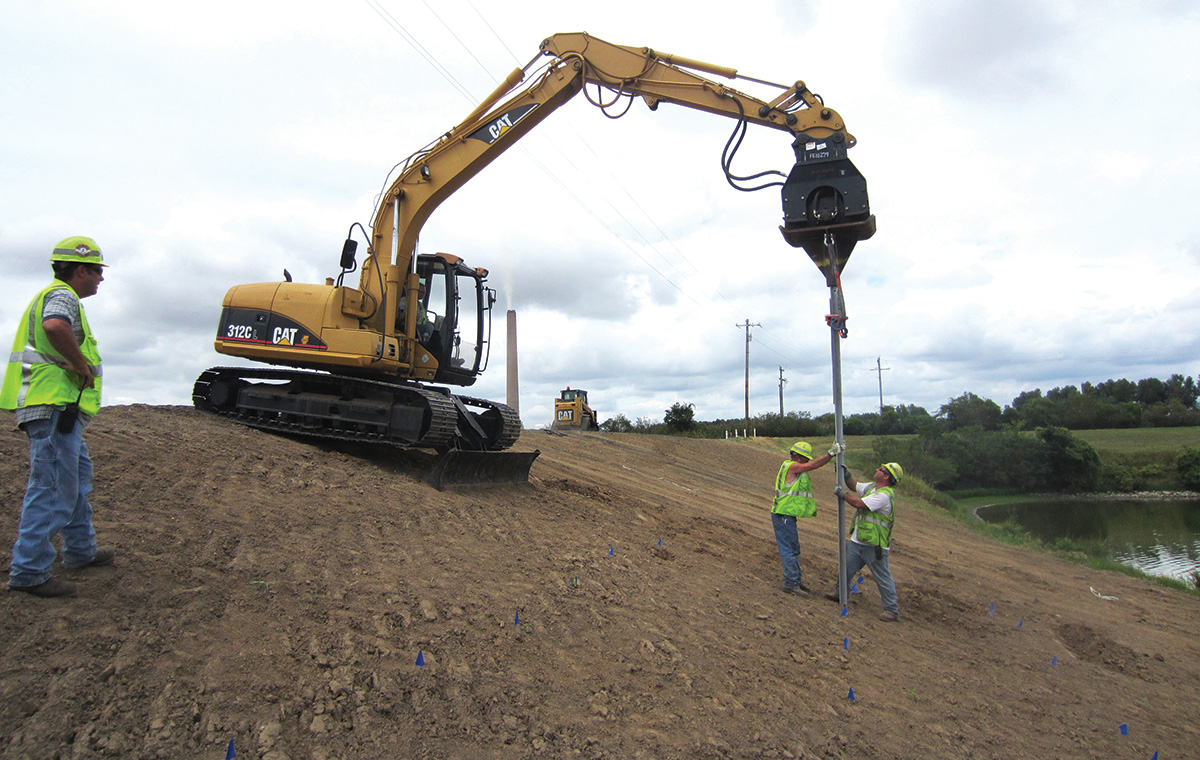 Until the IECS Conference!