When dealing with poor soil conditions on a development site, your first thought might be excavations, concrete, rebar, and lots of dump trucks.  This is largely how the industry has been run for decades.  The question that comes up is, “Is there a better way to do things?”

Approaching an age-old challenge from a new direction takes a new and forward way of thinking, as well as the implementation and adoption of new technology.  One of these innovative technologies is Rapid Impact Compaction (RIC).  With RIC, loose sandy ground is compressed through a driving ram, impacting the surface, and the final result is ground densification.  An important part of RIC ground improvement is in the quality control, where measurement of the before and after conditions help to verify the quality of the ground improvement results.

If required, post densification underground tests (SPT, is used to quantitatively measure improvement on a soil parameter level.  These can be somewhat costly, in particular for smaller sites where mobilization for a drill rig can be somewhat cost prohibitive.

Traditionally, measurements of the amount of RIC site drop (or void removal) are based on relatively crude surveying methods, along with on-board computer feedback and observation of the tamper foot. While these methods are still used today and can provide a reasonable qualitative estimate of the improvement, there are far more efficient and accurate methods for qualitatively verifying improvement that some people may not be aware of.

This is where another new way of thinking takes off… with drones!  A lot of ‘buzz’ has been created by drones recently in the news, and for good reason. The GPS guidance and gyroscopic stability systems have made drones a useful tool for applications never seen before, and the list is ever growing.  Within the last few years, the use of Unmanned Aerial Vehicles (UAVs or drones) to collect images for photogrammetric processing has risen significantly.  With a UAV survey, hundreds of millions of data points can be collected to provide never-before-seen detail of a relatively large area. The advantage is that the elevated perspective of the UAV allows for quick data collection, while maintaining absolute precision.  High levels of global accuracy are achieved with the use of Ground Control Points (GCPs) or Benchmark Points, which are established via RTK enabled GPS.

GeoSolv was tasked with preparing the ground for a construction site for a proposed casino in Peterborough, Ontario.  As part of their quality verification process, they used UAVs to take before and after surveys of the site.  After setting a few benchmark points used for ground control, the UAV flew the entire site in less than 20 minutes and collected all the data required for GeoSolv.  Back in the comforts of the office, the UAV data was analyzed and processed to create a topographical map with elevation measurements at a grid spacing of less than 2 square centimeters.  When comparing the before and after survey data, a ‘difference surface’ was produced, which was found by subtracting the compacted surface elevations from the initial surface elevations at every data point.  The combined results of these surveys provided a very visual gradient chart outlining the distribution of the elevation change over the site.

There are many factors that affect local variations in elevation drop as a result of RIC work, including local soil density variations, soil saturation, and other factors.  Through the difference plot generated by the UAV survey, it was possible to identify and confirm zones of variation in compaction and help to target areas where more compactive effort may be required.  The traditional method of rough before and after surveys really only allowed for a general average site drop to be determined.  The UAV survey difference surface also allowed the ability to look at boundary conditions along the edge of the work area. 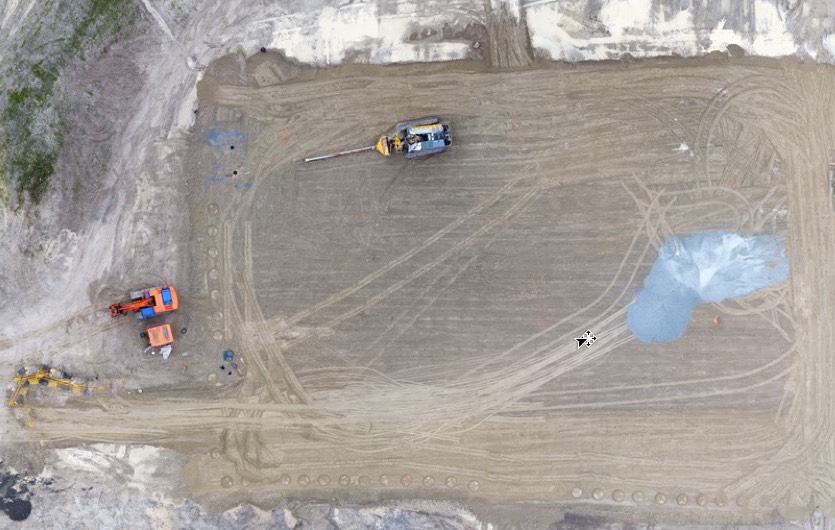 Given the accuracy of the data, and the ability to benchmark specific zones against other quantitative tests, the future direction for drone work on RIC sites might be to get to a point where UAV drones can provide a benchmark for quantitative measurement of improvement, rather than simply qualitative. 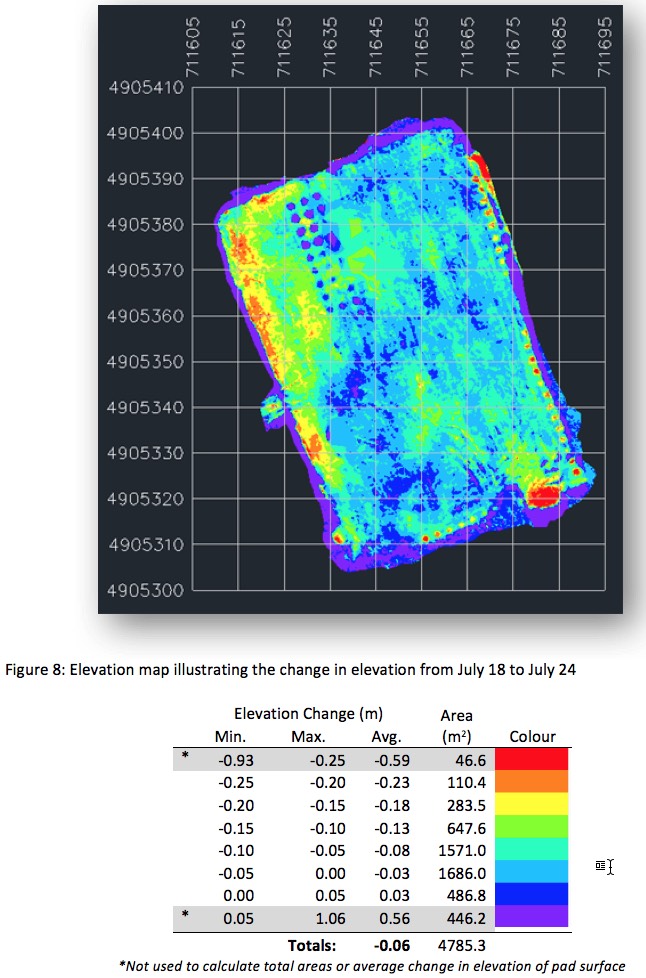 Despite the tight timeline, this project was met with ease.  The additional advantage of simultaneous collection of unique video and photographic perspectives of the work in action was an added benefit to the project.  The project was a huge success with the use of RIC and UAV technologies.